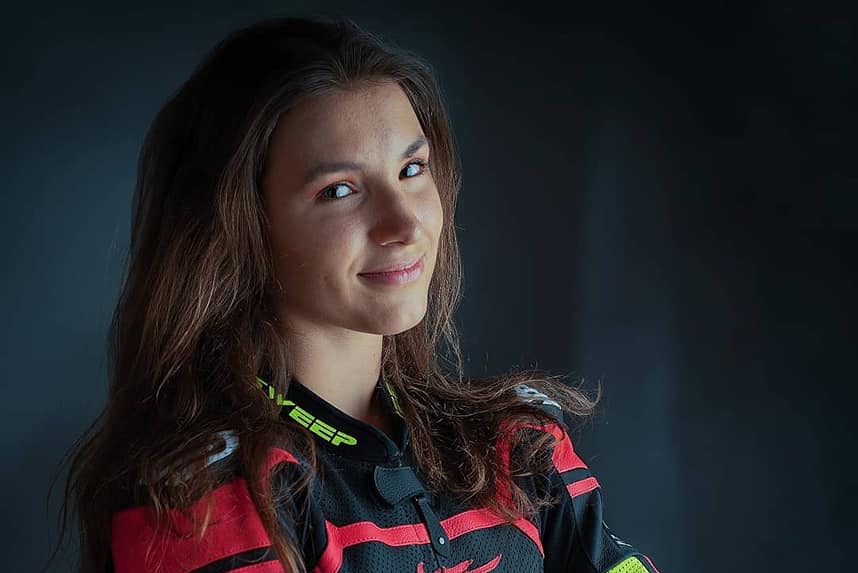 2019 FIM CEV Repsol season is definitely one to watch and follow carefully, as great entry lists and high level characterize Moto3 Junior World Championship, Moto2 European Championship and European Talent Cup. The latter, created for riders from 13 to 17 years of age, boasts even more than 60 riders on the field and one of them is the only girl taking part in the series: Jenny Ruokolainen.

Jenny Ruokolainen, who turned 17 on 3rd April, already provided a good performance at the opening round of the season, which happened from 5th to 7th April at Estoril (Portugal). The young Finnish remained out of the Main Race (admitting just 38 riders) for few tenths of a seconds and so she started from the front row in the Series 2, a race contested by the riders who ranked from 20th place down in the two Practice groups of ETC. During the race, Ruokolainen showed her skills to riders with more experience than she’s got and finally she missed the podium by just few tenths. The result itself is nothing special, but its value increases when you consider that Ruokolainen and the Track Punk Racing team had never raced outside Finland before. Now, the rider hopes to make more steps forward in the next round, scheduled from 26th to 28th April at Valencia.
Her debut in the European Talent Cup represents a huge step for Jenny’s career. The girl living in Espoo is experiencing her first season at international level, a move she did following the great results achieved in her home country. Let’s summarize them…

After becoming Finnish Minimoto Champion in 2012 (during her first year of racing…), the following three years saw Jenny Ruokolainen scoring podiums and wins in MiniGP and then, in 2016, the girl moved to Finnish Moriwaki Cup. Jenny seemed able to fight for the title at her first year in the series, but a high-speed crash at the beginning of the season forced her to miss three rounds. Fortunately, the concussion suffered in that accident didn’t affect the skills of Jenny, as she stormed back to competition by winning at Alastaro with 33 seconds of advantage…Actually, that win anticipated what happened in 2017/18, since Jenny became twice Finnish Moriwaki Cup Champion. Furthermore, the girl contested 2018 Red Bull MotoGP Rookies Cup Selection Event.

After seven years spent in Finland, in 2019 Jenny Ruokolainen and Track Punk Racing (team owned by Ari-Pekka Paivinen) have raised the bar and joined the European Talent Cup, a series contested also by teams like Ajo Motorsport, Sic58 Squadra Corse, Leopard Racing and Reale Avintia. The start was quite good, as told above, and the goal for the next races is to keep growing and climb the ETC standings.

What to say? Onnea, Jenny!