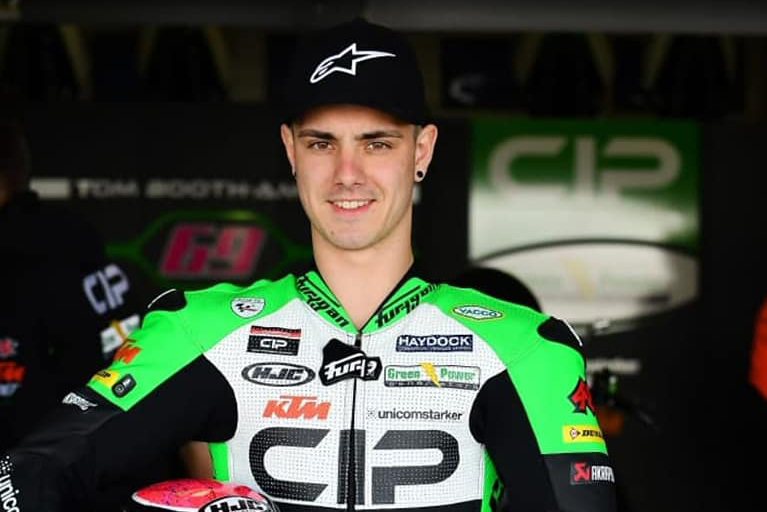 2019 Moto3 World Championship season counts eight rookies in the field, including some youngsters who already stood out already last year in their respective wildcard appearances (you shouldn’t have forgotten the podium scored by Celestino Vietti at Phillip Island and, especially, the incredible win by Can Oncu at Valencia). By contrast, Tom Booth-Amos was not that familiar to MotoGP fans.

After contesting the GP of Great Britain in both 2017 and 2018, Booth-Amos will participate in the full 2019 season with CIP-Green Power, as the French squad has signed him to compete alongside Darryn Binder. Differently from the other 2019 Moto3 World Championship rookies (Oncu, Vietti, 2018 Moto3 Junior World Champion Raul Fernández, Riccardo Rossi, Filip Salac, Ai Ogura and Sergio García), “TBA #69” finished 2018 season with no win or podium in his pockets, as he couldn’t achieve more than a fifth-place result and 22nd place overall in Moto3 Junior World Championship. However, the British rider has found a seat in Moto3 World Championship thanks also to Dorna and IRTA, who included him in their project called “British Talent”.

However, you’d better be careful, because what I’ve just written may definitely mislead you. Actually, Tom Booth-Amos has proven his talent several times so far. First of all, he was four times British Supermoto Champion (from 2011 to 2014) and then he even dominated British Motostar Championship (Moto3) in 2017, as the 22-year-old from Newport won 19 out of 22 races on the KTM lined up by Team City Lifting. This achievement confirmed that the decision of leaving gymnastics to focus on motorcycle racing, made in 2010, was definitely the best one for the guy born in West Midlands. In 2018, he stepped to Moto3 Junior World Championship with the British Talent programme.

Booth-Amos seemed able to perform very well also in the “Mundialito”, also thanks to a crew boasting world-championship experience. Unfortunately, the Brit scored much less than expected, following two injuries and lots of bad luck. The season had started very well: after being in the front in the Free Practice sessions, Booth-Amos started the race at Estoril from the first row and then he fought for the win until he crashed in the final stages. That crash was the start of a long time of suffering, whose second phase happened at Valencia. There, at the second round of 2018 Moto3 Junior World Championship, Booth-Amos broke his right wrist and hand following a practice crash and so he had to watch the two races of the weekend from the sidelines.

At the third round of the season, hosted at Le Mans, a strong pain in his left wrist prevented Booth-Amos from giving his best and the examination he underwent later revealed a fracture, which had been caused by the crash had at Estoril. This forced him to miss the two races scheduled at Barcelona and when he rejoined the championship at Motorland Aragon, another rider took him out during the race. Later on, at Jerez, Booth-Amos scored his first points in the season by finishing Race 1 in 14th place and then he scored a remarkable 5th place at the following round, in Albacete. Finally, the last two races of the year, in Valencia, ended up in two DNFs. By the way, the injury suffered at Estoril made Booth-Amos struggle all season long.

Despite a very troubled 2018 season, Tom Booth-Amos’ dream of racing in Moto3 World Championship has come true, thanks to the support of Dorna, IRTA, Truth Racing Foundation and CIP-Green Power. Despite being one of the smallest teams in the whole MotoGP World Championship, the French squad already boasts some podium finishes. So far, the season has been quite disappointing for Booth-Amos, as his best result is a 14th place scored in Barcelona. This weekend, his goal is to make some progress at his home GP, scheduled on 25th August in Silverstone.