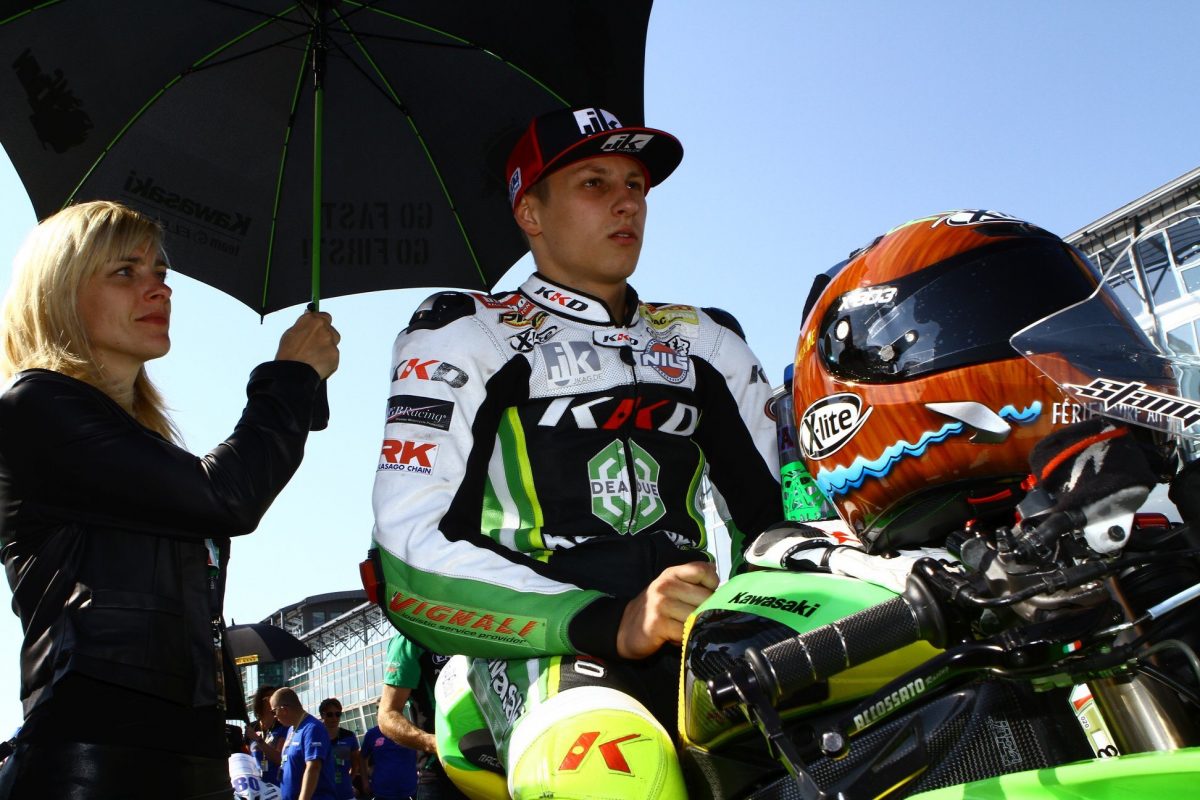 At the beginning of July 2018, a Fiat Scudo van left the small city of Heidenau (less than 15 kms away from Dresden) to head to Misano World Circuit Marco Simoncelli. The driver of that van was no team manager, no mechanic and no WorldSBK fan, but a guy ready to debut in Supersport World Championship. Yes, this is how Christian Stange, a 20-year-old German of humble birth, usually moves to the race track when he’s alone.

Born in 1998, Stange is the son of a butcher and a secretary and last year he got the opportunity of a lifetime thanks to Team Go Eleven, who called him to replace Michael Canducci from the round scheduled in Misano. The start wasn’t the one he hoped for, since a technical issue forced him to retire, but Stange managed to collect five points in the following four races, as he finished 15th at Portimao and 14th at San Juan and Losail (at Magny Cours, he was 16th).

I still remember the words Denis Sacchetti (Go Eleven Team Manager) told me once by phone, before he flew to Qatar: “You should have seen him at Portimao, when he scored his first World Championship point. He was as happy as a clam!“. During that same call, Sacchetti told me that Stange usually reaches the European race tracks with the van I talked about at the beginning, which also works as his bedroom during the race weekends. Today, world-championship riders rather stay in huge motorhomes or in at least 4-star hotels and so Stange is a rare example of “old style”. Furthermore, during that call Sacchetti described Chris as a “very nice, polite, humble and willing-to-grow” rider. A real gem to safeguard, in few words…

Christian Stange started racing at high level in 2011, when he joined ADAC Junior Cup (the main series for young riders in Germany). Then, he competed in IDM, the main motorcycle racing championship in Germany, from 2014 to the beginning of 2018. Here’s what Stange said to Speedweek journalist Ivo Schuetzbach last July: “In ADAC Junior Cup (single-brand series for young riders, ed) I initially went very bad, since the stuff I used was terrible. However, at some point, a person started to look after the engine and since then, I scored a win and three podium finishes (in 2013, ed). Later on, Denis Hertrampf (HPC-Power Suzuki Team Owner, ed) asked me whether I wanted to join his team in IDM Supersport. So, I entered the Circus“. In the following few years, Stange collected several podiums, two wins in 2015 with HPC-Power Suzuki and two more wins in 2016 with Weber Diener Racing Kawasaki. Finally, he stepped to Supersport World Championship during 2018 season, thanks to Gianni Ramello’s Team Go Eleven.

Back to the world stage

After this flashback, here’s a news about Christian Stange’s near future. Starting from the upcoming round scheduled at Buriram (Thailand), the young rider from Sachsen will re-join World Supersport thanks to Gemar Ciociaria Corse WorldSSP Team, Italian squad that signed him to replace Gabriele Ruiu. Stange will have one more valuable chance to prove his skills at international level, as he’ll ride an old, but still competitive Honda CBR600RR. He needs to adapt to a new bike, but Stange has already proven his determination in several cases and for sure he’ll success also in this new adventure. An adventure he will face with his usual humility and, in Europe, with his loyal Fiat Scudo van…